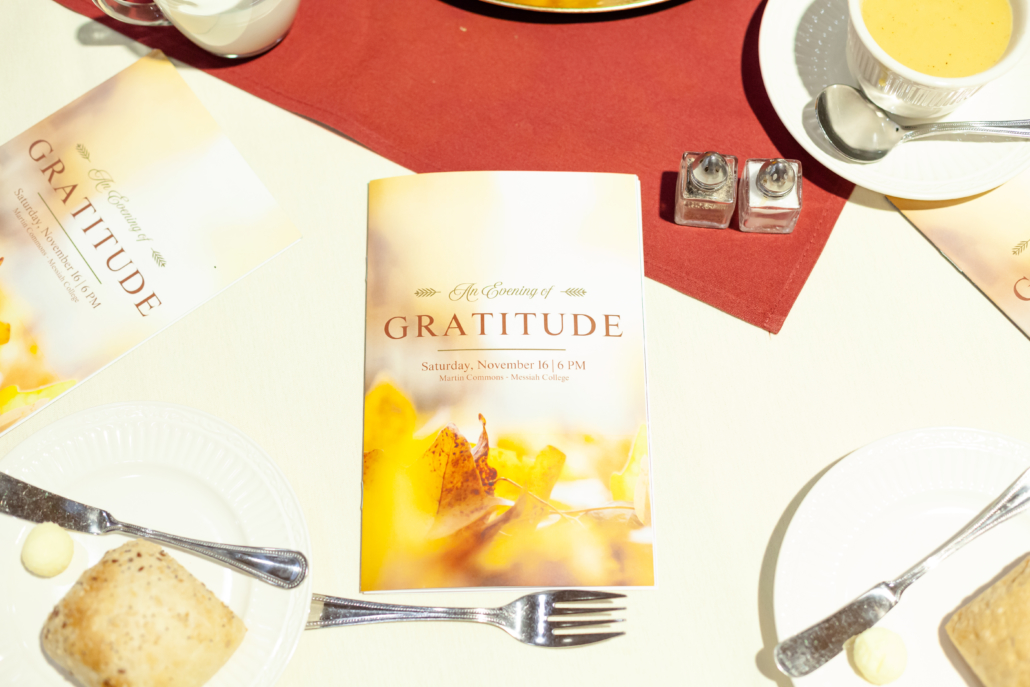 This year’s Evening of Gratitude, which took place at Martin Commons in the Eisenhower Campus Center at Messiah College on Saturday, Nov. 16th, began with the Covenant Chamber Choir’s gorgeous rendition of Gjeilo’s “Ubi Caritas.” The music was piercingly beautiful; the students sang, a cappella, with purpose, clarity, simplicity, and unity, providing a fitting beginning to a series of short talks that each expressed, in different ways, a love of and value for the school. 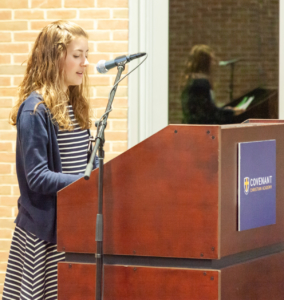 First to speak was Carley Hoover, a ninth grader who began by cheerfully explaining that, when she was asked to give a talk on what she is grateful for at Covenant, her first thought wasn’t “What am I going to say?” but rather “How can I say it all in three minutes?” She then proceeded to say it all in three minutes, offering an eloquent testimony to the way Covenant teaches students both what to love and how to love. Of all that Covenant does for its students, she told us, most significant is the fact that the school teaches them to love learning, giving each one the tools to think, to discover, and to reason. In this process, Carley argued, students also learn to love each other, and their Lord, with humility. Her own teachers and fellow-students, Carley told us, have – and this is a strong claim, but she seemed to mean it – never failed to be there for her. At the end of her three minutes, Carley stepped down from the podium, having given her listeners ample evidence of her own love and humility.

She was followed by Richard Prensner, Jr., a 2013 graduate of Covenant who now owns and runs a video-production company and who recently created a short film promoting the school. After showing the film, a moving consideration of daily life at Covenant, Richard reviewed his post-high-school career with humor and insight, describing the many jobs he took on after graduating from college. Having majored in Philosophy, Richard observed, made him an especially likely candidate for that perennial question, so beloved by all who are not college students: “So, what are you doing next?” Listing his experiences in different jobs, Richard lightly described his search for work that felt right: ballet-camp employee, student (at L’Abri, in Switzerland), online marketer (“there is a very thin line between being self-employed and unemployed”), and local lawn-care expert (“I’m back from college and ready to pick your weeds”). Though this was naturally, Richard admitted, a confusing time, he closed on a wonderful high note, reminding listeners of an essential point:

The answer to the question, ‘What do you do?’ will keep changing. [But the] more important question is the question Covenant is constantly asking … ‘Who are you  becoming?’ … And the answer to this question is exactly what Satan hates: someone  praying while kneeling. … If we kneel with our bodies long enough, our hearts will start to kneel as well. I learned how to do many things at Covenant but, most importantly, I  was taught how to do all those things while kneeling. And when you do things while kneeling, you have faith that you won’t always be a weed-picker. 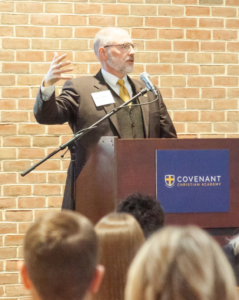 The final speaker of the evening was Dr. Calvin L. Troup, President of Geneva College, who, in a sense, brought together Carley’s and Richard’s visions of what Covenant does by showing how a valuable Christian education can shape students’ character. Borrowing from 2 Timothy, Dr. Troup depicted the culture against which we work as one influenced by those who are “lovers of themselves, lovers of money … without self-control, not lovers of the good,  lovers of pleasure rather than lovers of God— having a form of godliness but denying its power” (NIV v. 2-5). The key to fighting against such influence, Dr. Troup continued, is to place ourselves under good teaching, just as we are urged to do only a few verses later in this same passage of scripture: “…as for you, continue in what you have learned and become convinced of, because you know those from who you learned it” (v. 14). This, Dr. Troup told us, will give us the power of discernment, so that we may, by constant practice, learn to distinguish good from evil (Heb. 5:14). At Covenant, Dr. Troup concluded, this is what we seek to do, and this is what we do to God’s glory.

After a closing prayer from the Honorable Jeff Coleman, the last bites of lemon cheesecake and chocolate parfait were enjoyed and the last straggling teens were gathered to the bosoms of their parents. The many whose tireless work helped make the entire evening possible were, at last, free to rest. There was much for which to be thankful.

– Dr. Armetta teaches humanities courses in Covenant’s Upper School. She and her husband, Robert, are also the parents of Juliet (8th) and Adelie (4th). 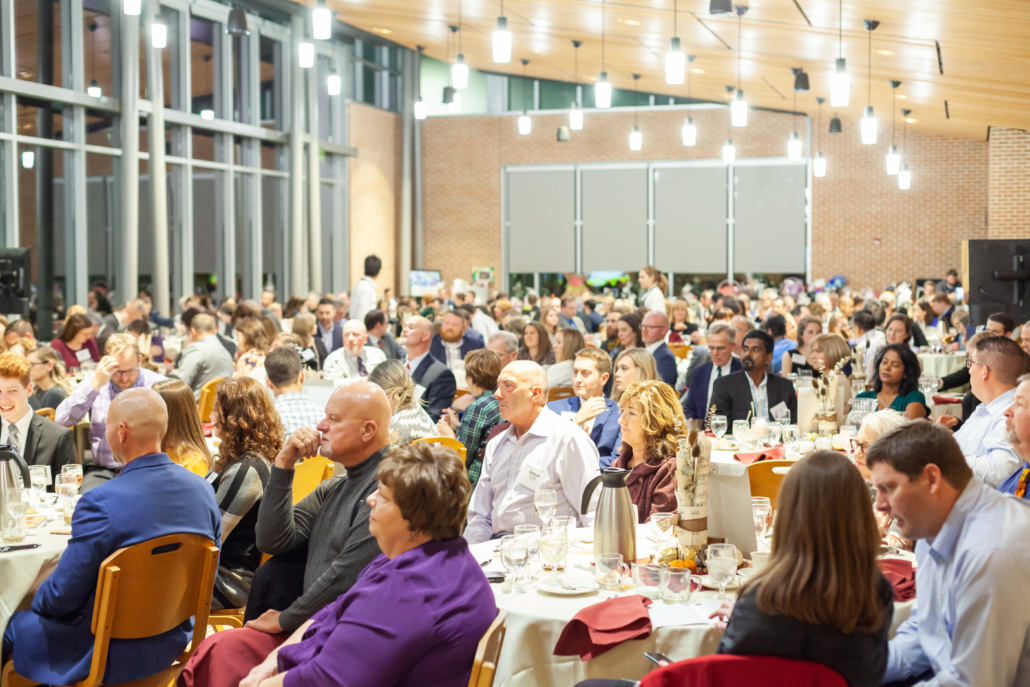 Martin Commons was filled to capacity for our 2019 Evening of Gratitude. 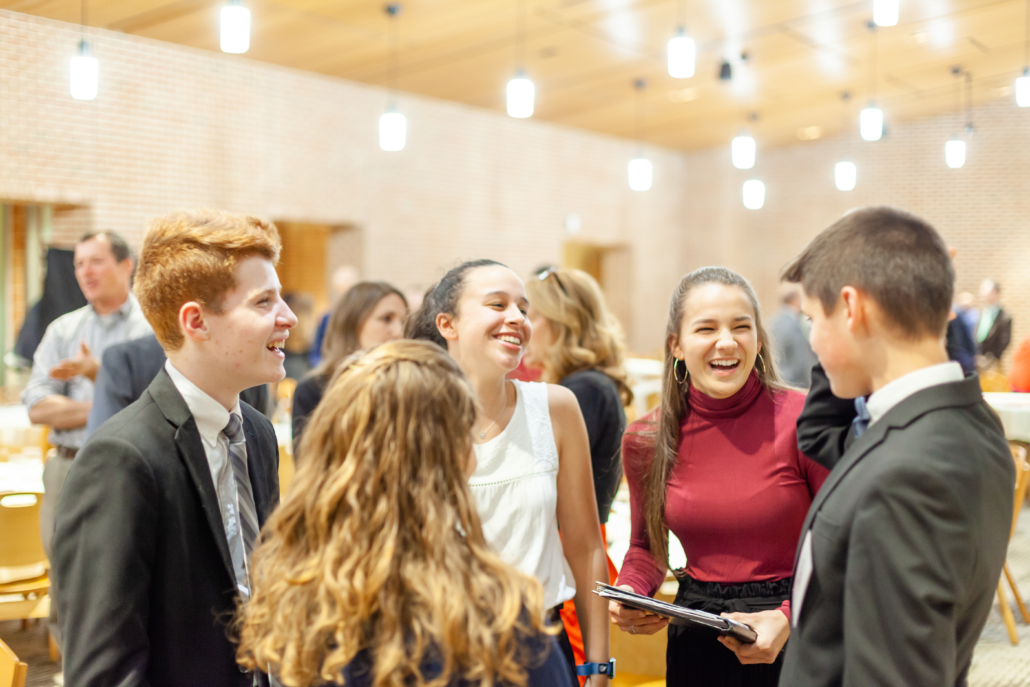 A Timely Discussion
Scroll to top