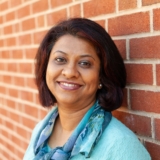 Miriam started at Covenant in 2019 as a part time Grammar School Aide and now works as our Capital Campaign Manager. Miriam attended Women’s Christian College in Chennai, South India and majored in English Literature. She served as Head of the Department of Music and Drama in a christian school in Bangalore for 10 years and directed several productions of musical theater in the school and city. She moved to PA in 2014, and directed Fiddler on the Roof in Spring 2017 for Cedar Cliff High. In addition to helping out at Covenant, Miriam enjoys teaching a 4 year old class at the Camp Hill United Methodist Church Preschool and is also the Director of Children’s Ministry at the Baughman United Methodist Church. She lives with her husband, Arun, and her 2 children, Nihal and Nehara. Arun serves as a Minister at the Trinity United Methodist Church in New Cumberland. Nihal is a student at Messiah College, and Nehara is a student in Covenant’s Upper School. In her spare time, Miriam enjoys theater, music, and floral art.